Olivia Mrozinski is studying towards a Bachelor’s in Technology of Biogenic Resources at the TUM Straubing campus. She and two classmates recently became three of 15 EU Youth Ambassadors for Bioeconomy. Their objective is among other things to sensitize the European Commission for sustainable transformation in society and the economy. 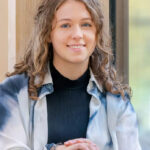 Ms. Mrozinski, how did it come to pass that you can now give the younger generation a voice as EU Bioeconomy Youth Ambassador?

Olivia Mrozinski: Last spring I read in social media that the European Commission offers a program for Bioeconomy ambassadors which is open to young people. I applied, together with my classmates Matteo Bifone and Philipp Schabert.

And the three of you won out over a total of 325 applicants. Congratulations.

Of course we were thrilled to find out this summer that we had been selected to be among the 15 EU Youth Ambassadors. Now I feel honored to be able to represent TUM and its Straubing Campus in Brussels and elsewhere as the only woman student from Germany.

What moved you to apply for the program?

Humanity is running out of time. Climate change is not just a problem of the future, it’s also a problem of the present and it calls for action by more than just one generation; groups of all ages have to work together. As a student at a sustainability campus I want to contribute to the transformation in all areas of life in order to make our planet more sustainable. I’m interested in all topics relating to Bioeconomy. Now as a Youth Ambassador I can actively take part in shaping this sustainable transformation.

Many may find the term “Bioeconomy” a little opaque. What does it mean to you?

In general Bioeconomy is a new economic model which relies on renewable resources as a basis for foodstuffs, energy and industrial products instead of using fossil resources like coal, petroleum and natural gas. Another important aspect of a viable future societal system is a Circular Economy. This will let us support environmental protection and climate protection and remain competitive, without societal and economic disadvantages. This transition to sustainable resources and energy calls not only for personal responsibility and self-reflection on the part of citizens, but also legal prerequisites.

Does humanity need to rethink its consumption habits?

As people who want to leave a livable planet earth for subsequent generations, we need a higher sense of awareness regarding our consumption. In addition, society and the economy will have to do away with the ongoing desire for infinite growth on a planet with a finite amount of resources. 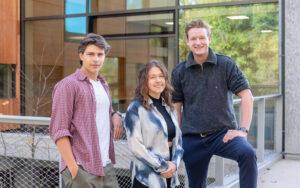 What does your assignment as EU Youth Ambassador for Bioeconomy cover?

During my two-year term I personally function as the contact person for sustainable design and international networking. The ambassadors want to educate people on all aspects relating to Bioeconomy and for example to work to raise the importance of the topic of sustainability in schools, but also to make sure it becomes a higher priority with politicians, entrepreneurs and investors.

You already participated in a high-ranking conference in early October…

That’s right, we supported the European Commission in Brussels among other things with the substantive design of the symposium. So we’re involved at a practical level in Europe’s sustainability transformation and we’re contributing our own ideas. We’re planning a major Bioeconomy Youth Event for 2024 which will bring young scientists, activists and farmers together with potential investors. We want to do more than just talk, we want to take specific actions.

Why is it so important to you that young people should stand up for Bioeconomy?

We as a younger generation have grown up with sustainability and climate protection – the two major issues of the 21st century. We’re talking about our own future. Nevertheless we’re often still not tied in to the important political decisions. So we not only have to convince politics and economy, we also have to convince parents and grandparents of the immense importance of a successful sustainable transformation.

How are your studies at the TUM Straubing campus shaping your role as EU Youth Ambassador?

The curriculum here gives as a holistic view of Bioeconomy – we can put ourselves in the position of the chemist, the engineer or economists with equal ease. This interdisciplinary approach makes the campus and its degree programs unique within Germany. In addition, at the university I’m the co-chair of the student group “TUM Campus Straubing Internationals”. It’s of great importance to me to create a diverse and integrative campus where we can engage in productive exchange on all topics regarding sustainability and Bioeconomy across national boundaries.