Ethanol is already being used as a fuel and blended with fossil gasoline. You can find it at the gas station, for example, when you fill up with E-10. Up to 10% ethanol is then added to the gasoline. The ethanol is mainly produced by fermenting sugars (alcoholic fermentation). 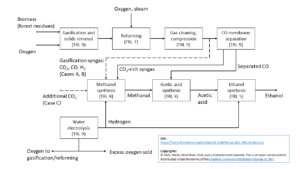 In collaboration with Finnish colleagues, Daniel Klüh from the Professorship of Renewable Energy Systems has developed a production process for ethanol that uses biomass and hydrogen as raw materials. After biomass gasification, a gas stream rich in carbon monoxide is produced in a membrane separation. The remainder of the synthesis gas is converted to methanol with the addition of hydrogen. In a subsequent step, the methanol is reacted with carbon monoxide to form acetic acid. In a final step, the acetic acid is hydrogenated. This yields ethanol.

Despite the long process chain, a very high carbon yield (ratio of carbon added to carbon contained in the product) is achieved. Furthermore, the calculation of the production costs shows a product price that is competitive with existing processes. Using the Finnish electricity mix to produce the hydrogen by water electrolysis, a saving of more than 75% of CO2 emissions can be expected compared to fossil gasoline. However, using the German electricity mix would result in higher CO2 emissions.

More in-depth results can be found in the article „Techno-economic evaluation of novel hybrid biomass and electricity- based ethanol fuel production”(in: frontiers in Energy Research). The article has been published under Open Access. This means that there is no cost to the reader for downloading the article. Thus, the research results have been made available to as many people in the world as possible without financial hurdles.